a quick trip to so. france~ 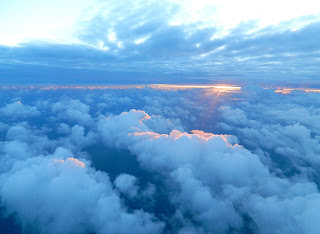 this incredible, spontaneous journey to so. france began from a Providential meeting with an eclectic
artist~ mary de la salandra, who was visiting her friend judith, in my small hometown of whitefish, montana.
i was asked by judith to take care of her 93 yr. old mother while her and mary played around this area for the next 5 days of mary's visit. when mary showed me pix of the cottage she and her husband raymond had lived in the past 12 yrs. i couldn't believe me eyes....it was my dream cottage, and it was for sale!
i then shared it with a sweet soul sister brooke, who was dreaming of cottages in france as well. brooke's parents called me over the next night to look at the pix and talk, and then the next thing i knew, they had booked tickets for the next week to go check it out!!
yet we could only stay 3 short days.... 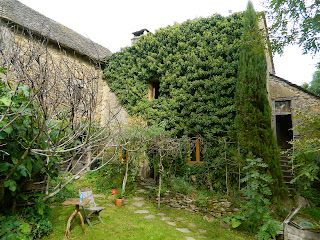 as soon we got situated in our cozy hotel in rodez, we couldn't wait to make our way over to the cottage in the tiny village of baraqueville, which is apart of the aveyron region of so. france.
the cottage is a 300 year old stone structure that raymond and mary have been lovingly working on since their journey 12 yrs. ago... she from oregon, he from england.  every nook and cranny is as charming as could be with their lovely, whimsical artistic touches! 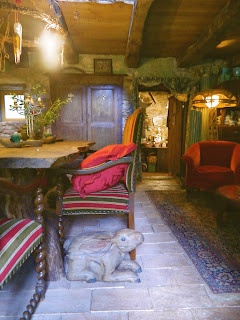 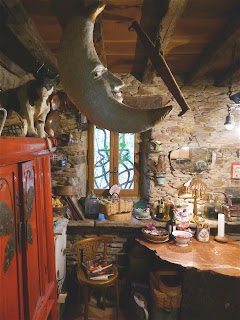 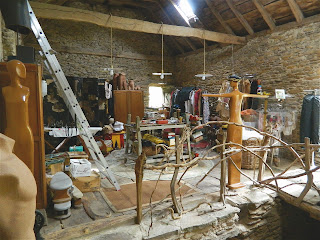 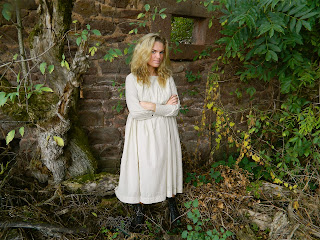 the next morning brooke and i explored around the grounds of the old home/converted-hotel we were staying in.  it reminded us of a secret garden where enchanted treasures were buried. 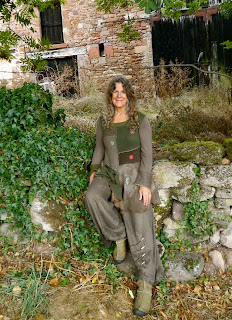 yet we didn't have enough time to explore as much as we would have liked then, as we were scheduled to go to the farmer's market in the town of rodez.  there we were delighted to find in the center of town, the local bread, cheese, olive and wine makers, as well as vegetable and fruit baskets, all canopied under umbrellas to catch the light, early morning misty rainfall. 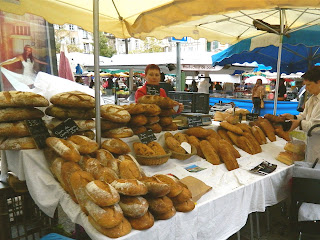 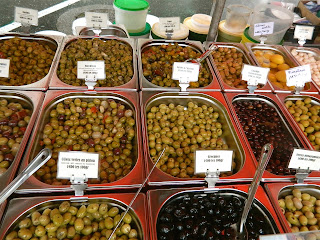 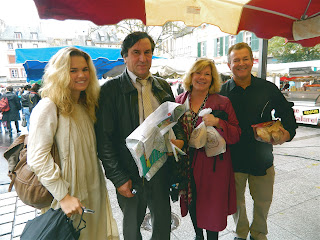 we had to try some samples of course and splurge, splitting a yummy french pastry and buying some fresh cheese and bread to take back to the hotel.  above is a photo of brooke, our chauffeur jean-marie, brooke's parents~ the queen of hearts allison & angel dad doug. 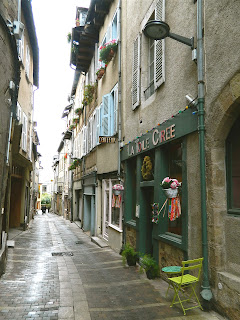 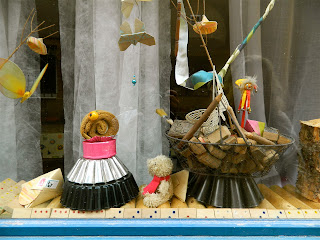 brooke and i enjoyed getting lost in the many winding, narrow stone and brick roadways that were delighting us to our childlike core! 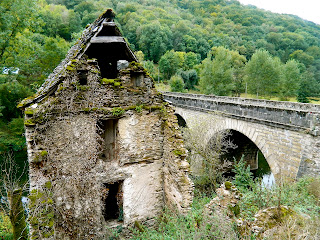 the next day in this wonderland we went to a nearby village 20 km. west of rodez.  the lovely ruin in the photo above was where we journeyed across the bridge then the road turned leading us to one of the most beautiful villages in all of france, the ancient village of belcastel. every structure in this village was built of stone. a magnificent fortress, the chateau de belcastel was built 1000 yrs. ago on a gigantic rock,
and became the fortress of knights, nobles, and rogues. 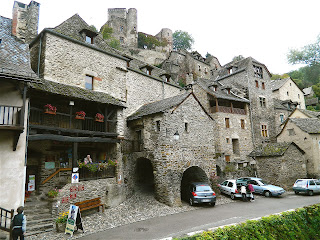 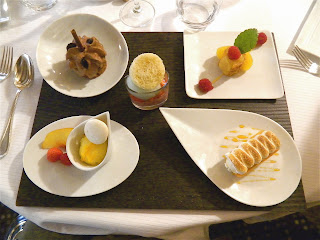 we dined there at a very fine restaurant owned and operated by 4 generations of family, who have always lived in this small village where the occupancy is about 50 people in the winter. what an incredible desert plate i shared with raymond!
the view below is from one of the castle windows of the charming belcastel church and beyond that the road ends with a hamlet of about 4 farms. 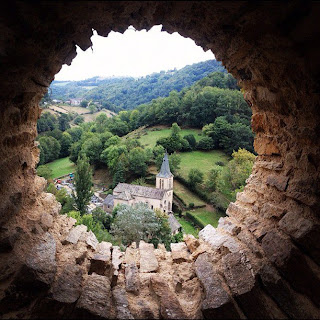 our last day before departure we went just 35km. north of rodez, high in the mountains, and deep in the mid-pyrenees to the magical little town of conque, which sits at the edge of a gorge, with population barely 90, with history traced back to the 600's. it too is considered to be one of the most beautiful and oldest medieval villages in france, with it's narrow cobbled streets winding throughout the mountain. 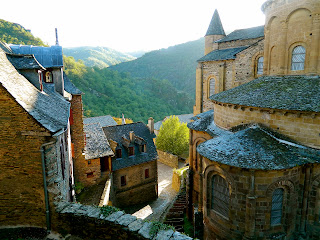 the abbatiale ste-foy or abbey church in conque was spectacular to behold. the windows were replaced after many years, by a contemporary design by a painter pierre soulaage in unique shades of grey. 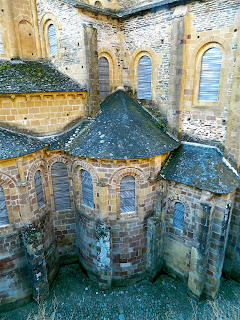 along one side of the abbey was a display of sarcophagi for some unfortuate soul's buriel! 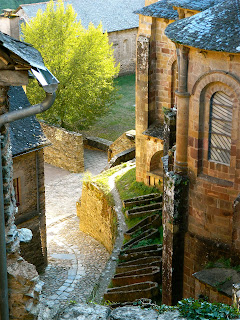 on the front doors of the cathedrale, is a very detailed carved picture of the last judgement, which is        carved with unbelievable detail and imagery, founded in 819, completed in 1120. 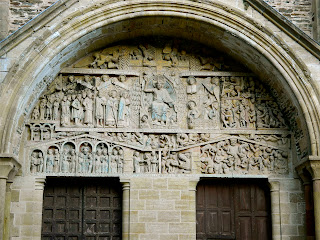 throughout this ancient land, the wonders never ceased and it felt as if i was in a dream that i have   dreamed and lived in for most of my life. the rich artistry and history that my being absorbed for only 3 days has etched itself into my core, and i long to return for more, more, more. 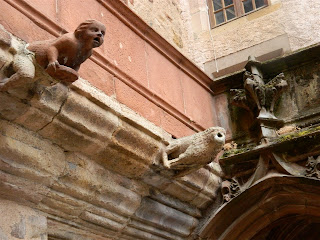 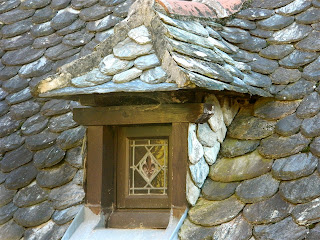 maybe to roam on a long adventure, to open new windows of wonderment and inspiration,

as it already feels like a home away from home. 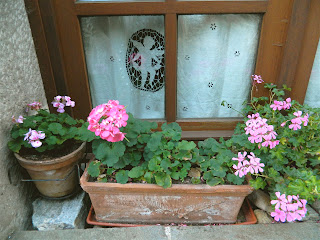 Love this area of France. So beautiful. How lucky that you got to visit. Love the picture of you. Just as beautiful as ever. Thanks for sharing your amazing journey. Take me with you next time you go!

i loved taking to heart each of the photos you shared. I am so glad that you had this experience. old world buildings hold so much spirit.... in each detail. xo

Praise God for His good gifts to you! So glad you had such a blessed journey! I hope it's the beginning of many more!

What a delightful adventure! Thanks for sharing your beautiful pictures. I hope you get to return.

Oh my goodness sweet Abigail!
Does all this look like a dream could possibly come true?
It certainly was taking a serious measure to go and actually visit.
I can see your heart wants to be there as it appears to be so amazing but there could be a number of hurdles to jump here.
Take good care my precious friend!
Oh there is so much wonder and beauty in each one of these photos.
It would be so nice to sit and chat about it all with you sweet friend.
Sending my blessings and my warm hearted love,
Suzy

Your pictures are so enticing. I love everything about France and it was no surprise that you had such elegantly served dessert in even the smallest of villages. Wish I were there! Enjoy.

A fellow friend from hwitefish! I found your blog through your post on Facebook. My partner Tom and I will be living in France, Spain and Portugal for six months next year and I would love to visit some of these places you visited in France. I’ll write their names down and explore on the map. If you can recommend any places to stay I’d appreciate it. We’re looking for less expensive- not fancy and preferable Air BnB or apartments attached to poeples homes. Thank you so much! Truly enjoyed your sblog ❤️

Rusted Wings
Whitefish, Montana
Simply to live in the Spirit of Love and to create art from the heart so the beauty we love may be what we do.
with blessings~
abigail folk 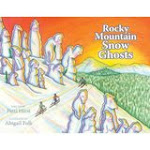